Tackle weeds in your garden during winter to enjoy beautiful borders this summer – and save yourself a mountain of work later in the year. In this post I share my favourite tools and tips on a task that every gardener has to deal with.

Weeds have loved this winter – get tough now

Weeds have barely drawn breath this winter in the mild south-west and continue to grow with depressing enthusiasm. Annuals like bittercress and groundsel are now producing several generations a year, while more troublesome perennials like nettle, dock, bindweed, creeping buttercup and couch grass spread with greater speed. Annuals fall into the ‘nuisance’ category, but ignore the perennial nasties and they’ll eventually overwhelm your lovely plants. Now is the perfect time to get them out them for good, whilst garden plants are dormant and your borders are as bare as they’ll ever be.

Distinguishing between annuals and perennials is hugely important because perennials regrow from any root left behind, so don’t make the rookie gardening error of skimming through your borders and just whipping off the leaves. The blighters will be back – and soon. A good thing about weeding now is that the soil is damp and roots come out with (relative) ease, once the soil is loosened. Using a long-handled fork or weeding tool is great for areas between plants, but when it comes to getting up close and personal to avoid damaging precious plants, I much prefer to work on my knees with hand tools. Especially having once given myself a real shiner of a black eye when knelt down next to my long-handled spade……

Having the right tools for the job makes the world of difference. My two favourite hand tools are a two-pronged weeder for levering out deep-rooted weeds, and a Japanese razor hoe which has a small, sharp-pointed, right-angled blade, perfect for slicing out annuals and winkling weeds out from the most awkward of spots. 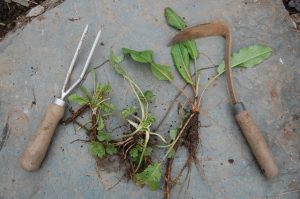 At this time of year, many perennials have died back to reveal hitherto-hidden weeds: with others, lifting their foliage usually reveals a few hiding beneath, and often within the clump itself too.

Plants that are thoroughly enmeshed with weeds call for severe action. Perennials and grasses can be dug up, pulled apart to remove the offending roots, and replanted in separate chunks – sounds drastic, but this actually rejuvenates them and gives you lots more plants for free too. More on this in a future post. For un-moveable plants like shrubs, cover the bare soil beneath with a weed-smothering material like brown cardboard or weed control fabric, and then cover this with a layer of bark chipping, mulch, or home-made compost.

Winter weeding is very much about seizing the moment, especially with short mid-winter days and seemingly endless weeks of rain. So whenever conditions improve, I’ve found it well-nigh impossible not to abandon the office and make the most of every decent moment.  A recent afternoon was just one such. After hours of dreary mizzle and late in the afternoon, the sky suddenly cleared. As the sun lit up streamers of cloud in glorious reds and oranges, I spent an immensely satisfying hour working through a border to lever out fat rosettes of buttercups, deep-rooted dandelions, and swathes of bittercress that was not far off flowering. The old saying of “one year’s seeding means seven years weeding” is pretty accurate and spurs me to get ‘em out before that happens. Do keep your weed waste separate as you work: annuals are grist to the compost heap, but perennials would simply carry on growing. I’ll be covering different ways of composting your waste in a future post.

Working outdoors is pure delight now the birdsong has really ramped up as they start to stake out their feeding and nesting grounds. I can almost set my watch by the goldfinches right now as a flock some twenty-five strong ( the rather beautiful collective noun for them is a ‘charm’), gather in nearby treetops, filling the air with their lovely glittering song – we call it ‘choir practice’ time. More birds up the volume as sunset approaches: robins and blackbirds in quadrophonic sound, the melodious sweet song of a distant thrush, a noisy ‘churr’ from a tiny wren – disproportionately loud for such a tiny bird. The nearly-full moon rises as the colour slowly bleaches from the west: finally I have to abandon weeding due to danger to plants – it’s too dark to work but it’s still too beautiful to go indoors – not until the final robin’s chirp has been replaced by the ‘twoos’ of the tawny owls, the midnight-blue twilight has almost faded to black – and my toes have frozen! A handy reminder to ready a stack of wood for the firepit to enjoy the twilight in comfort on another night.